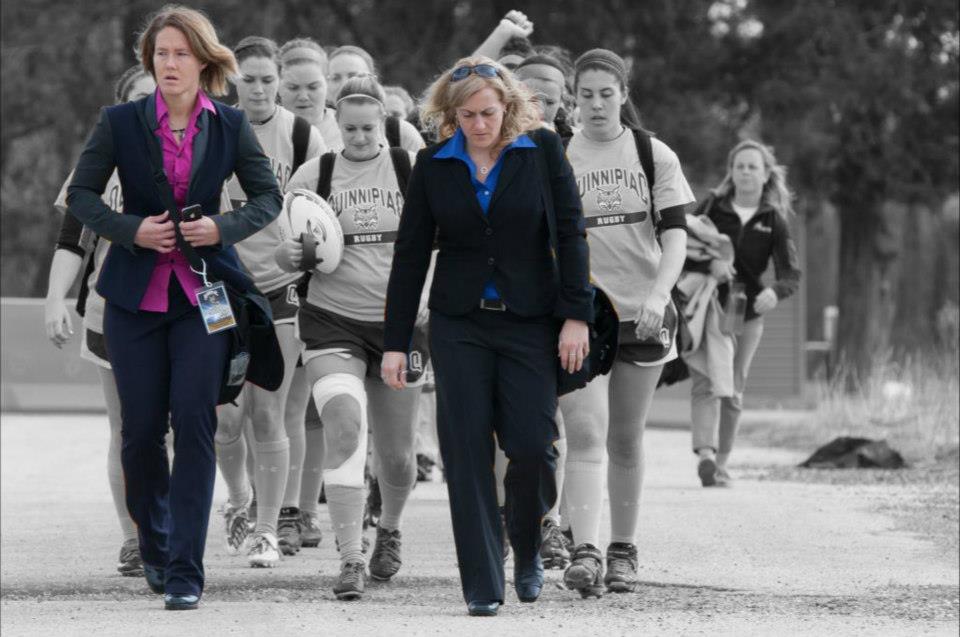 *This interview has been such a huge success and help for prospective rugby athletes, their families, and rugby coaches that we have updated the information. Last update of participating colleges, January 2019.

Here is a link to an incredible article Coach Carlson wrote December, 2016: Parents Empower Your Athletes to Talk to College Coaches

This week I am excited to share with you a different kind of interview with NCAA Division 1 Women’s Rugby Coach, Rebecca Carlson. Coach Carlson and I have been dialoging about two things, women’s rugby and the recruiting process.

Today we focus on Emerging NCAA sports and women’s rugby in particular. Even if you are not looking to play Rugby, I think you will find this fascinating. There are two parts to this interview. Make sure to read Part two, where Coach Carlson speaks more directly toward all prospective Division 1 athletes.

Coach Carlson of NCAA Division 1 Quinnipiac University has a wealth of knowledge on both rugby and the recruiting process. My intention is to provide the best information for every collegiate sport, including those sports that are new to the NCAA landscape.

As of Spring, 2019 there are 19 NCAA programs in the country for women.

There are 347 club teams in the country that are not tied to the NCAA but may have alumni money tied to their programs as endowed aid or some with admissions pull.

A side note: NCAA rugby for men does not exist as women’s rugby is an Emerging Sport classification in the NCAA. There are several men’s rugby teams that claim varsity status but NONE are classified as being part of the NCAA. With only 14 NCAA programs and over 347 club teams, opportunities and recruiting can be confusing for high school athletes. What is the difference between playing on a “club” team verses a “varsity” sport?

The difference is quite simple. Club sports at universities are governed by their recreational departments often with a volunteer coach or student coach. Travel, uniforms, transportation, and meal costs are covered by the student club member.

Insurance for liability is governed by the NGB of USA Rugby. Field space may be available on or off campus and shared with other club sports. Some club sports require the presence of a trainer at their club competitions but the vast majority operate without rehab/treatment or access to strength and conditioning programs and professionals.

Some club programs may have the ability to offer tuition waivers or alumni based assistance. These are not considered athletic grant-in-aid so do your homework before assuming these are “full rugby scholarships.”

Club athletes may only need to gain admission to the school to sign up to play club rugby. Some schools may have a relationship with admissions and could assist in the process with admissions.

NCAA programs are funded and operated through the athletic department of the universities. Cost for transportation, meals, uniforms, medical staff, practice and game facilities are all costs incurred by the athletic department. Programs of NCAA status maintain coaching staff members who are paid by athletics through the university and across different divisions must be certified through the NCAA on eligibility and recruiting.

Liability insurance is absorbed for each student-athlete and facility for rugby by the athletic department. Academic resources, coordinators and study hall for athletes is also built into the infrastructure of student-athlete support. Depending on D1, D2 or D3 programs may offer priority scheduling around practice and even athlete specific meal plans.

With rugby in its infancy in the NCAA most parents are not aware of NCAA bylaws pertaining to the health and safety of the student-athlete, eligibility and recruiting policies.

With D1 and D2 bylaws, coaches of these programs have specific guidelines to adhere to in the recruiting process just like all other sports. For details about NCAA requirements and eligibility, visit the NCAA eligibility center and check out my former posts on NCAA division 1, 2, and 3

Athletic Grant-in-Aid are scholarships available at NCAA schools. The national letter of intent is signed with a financial offer that is renewable each year. Scholarships are renewable and not granted on a four year basis.

While at rugby tournaments you may meet coaches from both NCAA sanctioned programs and those from club programs, a group of students who have formed a “Club” team associated with their school. These teams often have coaches, but are recreational opportunities.

At rugby events or tournaments parents and prospective student athletes must be aware of protocol for NCAA coaches. Coaches of NCAA programs are not permitted to speak to students until the tournaments have ended and the athlete has been released by the coach.

If a coach approaches you representing a “varsity” program while you are still active in competition or participating in the tournament, this is not only a violation of student-athlete well-being and safety but it is also disruptive to the competitors, their coaches and teams.

Regardless of whether or not coaches are NCAA or club, USA rugby also maintains rules about athlete safety in recruiting. Coaches are permitted to speak to parents but if you find that a coach approaches your child directly while at a tournament site you may politely ask them to wait until after the competition. If a coach is not abiding by any if these rules it is a clear indication they are not conducting themselves in accordance to NCAA rules and are either in violation or are recruiting for a recreational program.

Do all NCAA divisions compete together for a championship? Or in a league?

When the sponsorship hits 40 for women’s rugby (there is no rugby for men in the NCAA) the championship will be conducted by the NCAA. At this time the championship is operated by USA Rugby.

Do you play club teams, or only the schools you listed with varsity programs?

Schedules for NCAA teams are typically against other NCAA teams with a mix of top level club teams. (Our program in particular plays all NCAA teams because we have the ability to travel but must have majority NCAA competition at the moment with some club teams in the mix.)

Are new varsity rugby teams coming in the next few years?

The NCAA is home to what they sponsor as full championship sports. Rugby was identified as an Emerging Sport in 2002 when the first NCAA team was elevated. Since then there have been 14 new schools. There are over 300 women’s club collegiate rugby teams in the country.

The number is growing every year for NCAA teams with several looking to elevate or add for 2016.

Emerging sports, like women’s rugby, have unique challenges in the recruiting process. To help you figure out who you are talking to when you are approached by a coach, Coach Carlson has some helpful tips.

The recruiting process is the exact same in terms of eligibility through the NCAA. Rugby is in it’s infancy in the US and parents and recruits are typically not up to speed on the process. The language that is used when speaking to a college rugby coach about their program is important so potential student athletes and their families can determine and differentiate between a variety of opportunities.

Is the program specifically under the wings of the athletic department?

What is the level of support by the athletic department?

Is the coach full time? How many dedicated paid staff members for the program?

What kind of liability coverage and medical treatment is available to the program?

Is there an academic support team for the program?

Is the cost for travel and equipment covered by athletics?

Is there an on campus facility dedicated to rugby play?

Is rugby treated exactly like all the other teams sponsored by athletics in that department financially and operationally?

Does the coach complete yearly recruiting and eligibility certification by the NCAA?

If the answer to any of these questions is no, the program is a recreational program regardless of team designation as “varsity.” Please be diligent in your questions because these are relevant to your child’s future and safety. In Carlson’s fourth season at Quinnipiac, her team has appeared in 3 national tournaments and ranked in the top 5 in the nation 3 out of 4 seasons with a record of 34-14-1. This past season, Carlson’s Bobcats fell in the Final Four against powerhouse Penn State for a third place finish nationally.

Carlson was named the 2014-2015 College Coach of the Year. Carlson is the NCAA’s first female D-I head coach in the sport.

Carlson has been at the forefront of the women’s rugby movement over recent years. As USA Rugby’s Emerging Sports Program Manager, Carlson conducted research and developed plans for more than 30 prospective NCAA institutions who would potentially add women’s rugby to their athletic program.

Also the co-founder of her non-profit varsityrugby.org, Carlson is an advocate and lobbyist for the women’s rugby game at both the high school and NCAA level. After seven years of working alongside the Colorado High School Activities Association (CHSAA) Carlson and her co-founders of VarsityRugby.org successfully achieved the bylaw development and implementation for Colorado to be the first state in the US to add rugby at the state high school association level.

Carlson also used her extensive multimedia background in developing promotional materials to be used alongside the NCAA national office, the NFHSA and to NCAA athletic directors. Also, while at USA Rugby, Carlson leveraged a key marketing campaign for a funding program to assist high schools in elevating their club teams to varsity status. Carlson was instrumental in 2008 in assisting Sebastian River High School in housing the first varsity high school girls program in the nation.

Carlson is currently an advocate in many areas of women’s athletics and gender equity and is a proud member of the Alliance of Women Coaches. Her experience in multimedia development has allowed her a handful of appointments as an A/V specialist for events such as the Huddle, and the NCAA Women Coaches Academy.

From 2004 through 2006, before joining USA Rugby, Carlson was an assistant coach with the Eastern Illinois University women’s rugby team. She previously worked at Ferrum College as a women’s lacrosse, softball and soccer assistant coach in 2004.

Next, take a look at NCAA and NAIA Recruiting Rules.

If so, I have written a book just for you. It provides more amazing information and tips to help you navigate the recruiting process.