I am pleased to share with you the wisdom of NCAA Division 1 Men’s Tennis Coach of the University of South Florida, Ashley Fisher.

Coach Fisher’s full bio is at the end of the interview.

When a high school tennis player personally contacts you by phone, text or email, what will you do next? When should athletes begin contacting college coaches?

If I’m approached by a recruitable high school athlete expressing interest into USF the first thing I do is plug his name into the UTR website. I want to have a clear picture two years out of who I plan to recruit but realize it’s often a fluid situation and am ready to adapt. I don’t see any downside to making contact with coaches very early. The connection between player and coach plays a huge role in determining which prospects can be converted into team mates.

Could you share, in whatever detail you are comfortable, what the athletic scholarship break down looks like on your roster and what is allowed by the NCAA Division 1?

What is your recommendation for boys from the U.S. with so much international competition for college roster spots in tennis?

I don’t really have any advice for US kids except to work hard and compete unconditionally. I learn a lot about a player based on how he loses. The influx of international student athletes has improved the overall product of college tennis and is a big reason why college tennis is a viable path to the ATP World Tour.

I try to find high character guys who play a high level of tennis and work hard. Florida kids are great because the proximity makes it more feasible to spend time with them and become comfortable with them and their family.

How do you use social media when recruiting internationally? What is your advice to recruits about their use of social media?

I use social media to update our fans and grow the USF brand. I also look at prospects Facebook pages to see the sort of content they are posting. It’s a snap shot but I like seeing a lot of tennis and family photos.

How should international players and coaches initiate the college search in the U.S.? I don’t believe there is a right way to get started except that the sooner the better. It’s always helpful to find a common connection that can talk to the coach and vouch for the player.

Get a list of schools and write personalized emails and add a link to UTR. We get hundreds of these emails every year and anything that can make reading them more efficient will be welcomed.

How do you go about finding, scouting and contacting international athletes?

I follow the ITF Junior Circuit and have a network of federation coaches that I’m friends with from playing the tour myself for fourteen years. I’ll often use Facebook to contact potential recruits. Scouting is done by attending events. Nationals and junior grand slams are a big piece of it.

What are some of the hurdles international athletes should be aware of when looking at colleges in the U.S.?

Hurdles for international students are higher tuition at state schools (out of state). Admissions can be stressful and time consuming.

What would keep international athletes from realizing their dreams of coming to the U.S. for college?

I’m not aware of anything preventing an international student from realizing his/her dreams. In my experience this has not come up.

What is the role of the parent in international recruiting?

Parents need to feel comfortable with the coaching staff. They are handing off their son. They are typically cautious and want to understand the process well.

Are your athletes, who may speak English as a second language, able to succeed in the classroom?

Our athletes have a proud history of doing well academically. Two years ago we had the highest GPA in the American Athletic Conference of any sporting team.

Should international students use recruiting services? Are they useful or necessary to find opportunities and scholarships in the United States?

Recruiting services can be useful. They often have relationships with coaches and it’s not in their interest to push a kid to a school who is not a good fit.

What do your international athletes typically do when they graduate? Do they stay in the U.S. or return home? Are they successful getting jobs?

Most of our international guys have returned home. Some are still playing professionally and return to Tampa to train with us occasionally 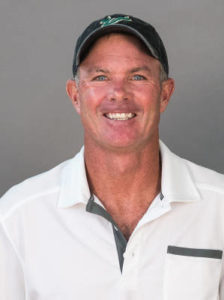 Ashley Fisher was named the head coach of the USF men’s tennis program in July 2016 after serving as the assistant coach for one season.

Fisher joined the USF men’s tennis program in 2016 after a long career as a touring professional, television broadcaster and coach.

Fisher spent 14 seasons (1998-2011) as a professional tennis player on the ATP World Tour, capturing four ATP World Tour doubles titles and reaching the semifinals of the U.S. Open (2006) and quarterfinals of Wimbledon (2004) and the Australian Open (2006).

For a full bio go to USF Men’s Tennis.

Next, check out: No Fear of the Recruiting Process: 2 Tips